The new plant will be built at the Finale Emilia production site for an investment of over €60 million and is scheduled to begin production in June 2023.

Atlas Concorde, one of the leading global players in the ceramic tile industry, has announced an investment of more than €60 million for the construction of a new porcelain slab production plant at its site in Finale Emilia (Modena).

The new plant, which will expand the existing factory by an additional 35,000 square metres, will be equipped with the most advanced production technology and will achieve the highest standards of environmental sustainability in the industry, demonstrating Atlas Concorde’s commitment to a zero-carbon future.

The facility will be equipped with a photovoltaic system capable of generating up to 3,850 MWh per year, effectively reducing CO2 production by 2,000 tonnes . It will also have a very low level of pollutant emissions and will be hydrogen ready in preparation for the future introduction of hydrogen into the production process.

The plant is already under construction and is expected to begin production in June 2023, increasing the number of jobs at the Finale Emilia site by approximately 60%. This latest investment aims to strengthen the company’s position in the large ceramic slab segment and follows the €160 million already allocated by Atlas Concorde for industrial and logistical development over the last five years.

As CEO Maurizio Mazzotti notes, the company is expanding slab production “alongside the large-format porcelain tile and ceramic wall tile segments where Atlas Concorde continues to consolidate its presence”. The images show an aerial view of the extended area of the Finale site and a detail of the photovoltaic system. 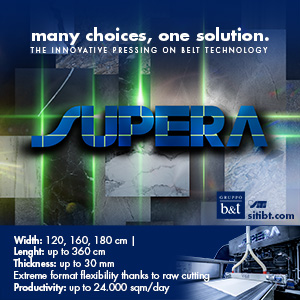